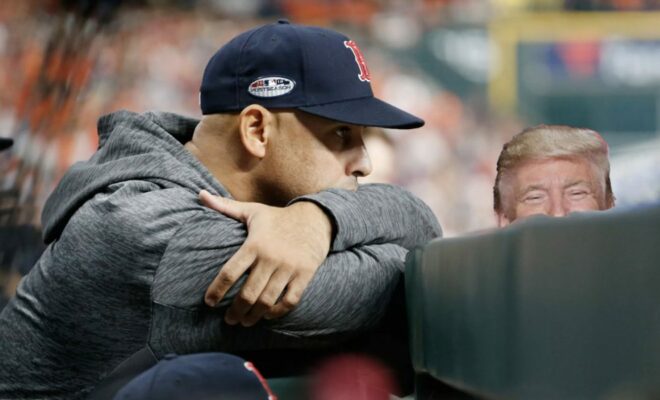 Remember when the Red Sox won the 2018 World Series and were invited to visit the White House and the team’s manager decided he wouldn’t accompany the team?

That manager, Alex Cora, decided to skip the visit because he felt that President Trump had short-changed the level of relief sent to Puerto Rico in the aftermath of Hurricane Maria.

Trump absorbed the snub but, in May 2019, the president decided to let the world know just how massive the relief package he sent to Puerto Rico actually was.

Puerto Rico has been given more money by Congress for Hurricane Disaster Relief, 91 Billion Dollars, than any State in the history of the U.S. As an example, Florida got $12 Billion & Texas $39 Billion for their monster hurricanes. Now the Democrats are saying NO Relief to……

He says he would feel "uncomfortable" meeting Trump because he is a Puerto Rican native.

If he thinks Trump did such a bad job shouldn't he take the chance to talk to him?

It’s hard to see how Cora, a native of Puerto Rico, never considered that Democrats were pushing a false narrative to bolster funding to the island government because they were extracting enormous sums of money from their association with the Democrat dominated Puerto Rican government.

Well guess what Cora was up to while his conscience was preventing him from attending the White House?

At the same time he was trashing President Trump for supposedly lacking the moral fortitude to throw more money into a corrupt cesspool, Alex Cora was stealing baseball’s championship by cheating.

What a freakin’ hypocrite!

“Cora arranged for a video room technician to install a monitor displaying the center field camera feed immediately outside of the Astros’ dugout … One or more players watched the live feed of the center field camera on the monitor, and after decoding the sign, a player would bang a nearby trash can with a bat to communicate the upcoming pitch type to the batter.”

Was this another case of the Trump Curse? You can decide for yourself.

← Previous Story Ilhan Omar Challenger Banned From Twitter For Saying the Rep. Should Be H*nged for Treason if She Passed Info to Iran
Next Story → VA Governor Declares State Of Emergency – Law Enforcement Is On High Alert Ahead Of Gun Grab