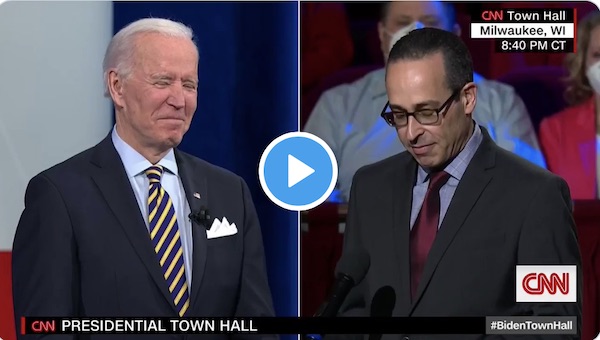 I’m sure you will be ‘shocked’ to learn that the leftist media, the one that seems to be 100% under the thumb of the CCP and it’s sympathizers, chose not to make a big deal out of this absurd statement by Joe Biden.

If you ever had any doubt about how the Democrats, and their leader, Joe Biden really feel about the people who put their lives on the line to protect us (and most of all THEM), you need to see this clip.

There are millions upon millions of people in the military and police forces around the nation.  I would go out on a limb and guess the majority of them are ‘white’ (whatever that means exactly) … and last time I checked this was the best country in the world … despite the current regime trying to ‘fix’ that once and for all.

Are there bad apples, sure, there are in every bunch.  Just yesterday Ed Markey, Democrat Senator from Massachusetts suggested distributing medicine based on skin color … where were the cries of racism then?

Biden and the Dems hate the military because they know the military is filled with patriotic Americans who love the Constitution and take that little line in their oath about ‘enemies foreign and domestic’ very seriously.

Here’s what Biden had the gall to say about our brave men and women in the services.

President Biden took aim at the very same Americans who dedicated their lives to keeping the country safe.

“And you see what’s happening — and the studies that are beginning to be done, maybe at your university as well — about the impact of former military, former police officers, on the growth of white supremacy in some of these groups,” the President said.

“You may remember in one of my debates with the former president, I asked him to condemn the Proud Boys. He wouldn’t do it. He said, ‘Stand by. Stand ready.’ Or whatever the phrasing exactly was,” he recalled.

“It is a bane on our existence. It has always been. As Lincoln said, ‘We have to appeal to our better angels,’” President Biden said.

CNN tweeted out the clip, titling it:

President Biden says White supremacists are the greatest domestic terror threat in the US: "It's complex, it's wide-ranging and it's real." #BidenTownHall https://t.co/P1CFPNzLBl pic.twitter.com/dygwnLuXe1

Those evil white people, just like everyone else … wanting to be left alone to live their lives and help their communities, how evil.

Oh, and before this gets misconstrued, I don’t mean ‘left alone’ as in to be with people only of their race, I mean get the government off their backs as well as the backs of everyone else.

Making decisions based on race is, and always will be … wait or it … wait … RACIST!!  We abhor racism. Period.