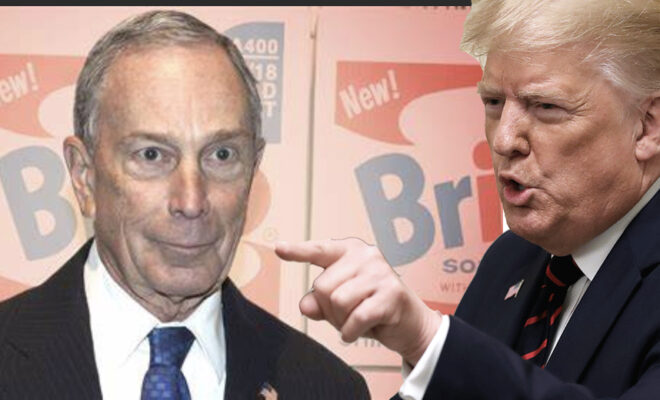 OPINION|  Mark Sidney|  Micheal Bloomberg never ceases to amaze me with how out of touch he is.

His entire schtick seems to be telling the American voters that we are too stupid to think for ourselves and that we need ‘Mini-Mike’ to take care of us.

‘That’s absurd, he has never said that!’ you might be thinking.  Well, if you are, perhaps you should watch this:

“When we raise taxes on the poor, it’s good because then the poor will live longer because they can’t afford as many things that kill them.”
~Nanny State Mayor Bloomberg pic.twitter.com/23p443ieg4

Yeaaaa, what I heard there was basically as follows:  poor people are too dumb to decide what to eat. The solution to this problem is a regressive tax (a tax which is felt more by the poor than the rich)

Wikipedia explains: ‘A regressive tax is a tax imposed in such a manner that the tax rate decreases as the amount subject to taxation increases. “Regressive” describes a distribution effect on income or expenditure, referring to the way the rate progresses from high to low, so that the average tax rate exceeds the marginal tax rate.’

There are plenty more examples of Bloomberg and his God complex, which I will not bore you with, but you should know that Mike successful worked to change the law in NYC to allow himself a 3rd term.

CNN (sorry Facebook likes it when you use these kind of sources) reported at the time:

Bloomberg, who introduced the measure, welcomed the council’s approval as the “right choice.”

Unsurprisingly, back in August of 2012 the New York Times reported:

As for a fourth term? No thanks.

With less than 18 months to go in Mr. Bloomberg’s unexpectedly long mayoral tenure, nearly three-quarters of New Yorkers said he should not have been allowed to run for a third term, according to the latest poll by The New York Times.’

That brings us to the most recent absurdly out out touch and elitist thing that Bloomberg has said.

I am sure you recall the story of the shooting at the West Freeway Church of Christ down in Texas.  On the off chance that you are not aware, a crazed man pulled out a shotgun and killed to people before members of the congregation took out their own pistols and neutralized the threat.

‘Average’ American citizen, Former Reserve Sheriff’s Deputy Jack Willson took a single shot which killed the would be mass murderer on the spot.

You would think that we would all be thankful for the fact that this patriot was willing and able to do what needed to be done to save the lives of the remaining worshipers, right?

Wrong!  Don’t believe me?  Ok, listen to Mike yourself then:

Seconds after a gunman open-fired at a Texas church, a good guy with a gun stopped him. Jack Wilson is the "average" American Bloomberg thinks should be disarmed.

Does he understand that when bad things happen — time matters? He should give up his 24/7 armed security. #hypocrite pic.twitter.com/qZG8IzfelA

Uh, wut?  Maybe I am crazy here but, is Bloomberg not implying, or would the result of his views not be, that those citizens in the Church should have just hoped they did not get shot?

If only cops can shoot bad guys as Bloomberg suggested, then what would their other options have been other than to run and pray they and their kids did not get murdered?

This is beyond infuriating, I honestly do not even think most gun control advocates would have the balls, or terrible sense, to make such a crazy argument.

I am not the only one who thought this was just so over the top and idiotic either:

Now Mini Mike Bloomberg is critical of Jack Wilson, who saved perhaps hundreds of people in a Church because he was carrying a gun, and knew how to use it. Jack quickly killed the shooter, who was beginning a rampage. Mini is against the 2nd A. His ads are Fake, just like him!

Bloomberg is the most out of touch candidate I have seen, perhaps in my life.  The man makes HRC look like a down to Earth and relatable humanitarian fr crying out loud.

Some of my buddies think that lil Mike will be the Democrat nominee and I can only hope that they are right, Trump will eat this guys lunch.